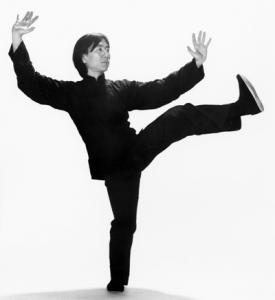 Grandmaster C.K. Chu (1937-2013) was one of the great tai chi masters of the twentieth century. When tai chi was new in the United States, his students defeated other martial art stylists to win championships. His books were among the first books published about tai chi in English. And his Book of Nei Kung was the first book published on the topic ever. Over 40 years of teaching Taoist arts in Times Square, Master Chu touched thousands of lives for the better.

A retired teacher of high school and college physics at Brooklyn Tech, Master Chu is best known as the founder of the world-famous CK Chu Tai Chi school in Times Square that was the center of his teaching, training, and writing for 41 years. The school continues teaching his tai chi system, in accordance with his wishes. A dedicated teacher, Chu was at the school six days a week and he personally taught first-time students as well as advanced practitioners. For decades the highlight of the school’s traditional Lunar New Year banquet was Chu’s toast about the meaning of the new year’s zodiac animal; whether rat or rooster or dragon, the moral was invariably to do more tai chi and Nei Kung in the coming year.

The related non-profit Tai Chi Chuan Center—also founded by Chu—has delivered more than 18,000 student hours of tai chi public health programs to senior centers and parks around New York City since its creation in 2000. The largest component, on the Fountain Terrace in Bryant Park from May through September, kicks off each year with World Tai Chi Day and typically attracts 45 students twice a week for free 7:30 AM classes.

Although the slow, graceful movements of tai chi are widely studied and appreciated for their health-improvement value, Chu never separated health from self-defense. “Tai Chi Chuan,” he would say, “is a fighting art.” Chu delighted in training tai chi students who won full contact martial arts tournaments, often to the surprise of proponents of hard-style martial arts systems. At the 1981 Madison Square Garden martial arts finals, students Vincent Sobers and Richard Trybulski each won their respective middleweight and heavyweight titles by knockout. At the New York Chinese Martial Art Championship and Tri-State Kung Fu Full Contact tournament in 1996, student Hugh Marlowe also claimed the heavyweight division by knockout. Undefeated for two years in US finals in Baltimore, John Signoriello went on to fight on the United States Kuo Shu Federation Team in Singapore; in 2006 that organization named Signoriello Fighter of the Year.

Chu’s first book, Tai Chi Chuan Principles & Practice (Sunflower Press, 1980) includes his translations from Chinese of classical Tai Chi Chuan texts including The Tai Chi Treatise and a famous Question & Answer dialogue with Chen Wei-Ming, along with Master Chu’s commentary and interpretations by other famous 19th and 20th century masters. In his 2006 introduction to the third edition, Chu wrote: “Looking back…I see how the tai chi classics are more relevant today than ever. In the 1970s few people had heard of tai chi here in America. Now we have the opposite problem. It’s almost as if there’s too much tai chi…. The authentic meaning, once available only through a few rare sources, now threatens to be lost in a mountain of information…. For this reason I say consult these classic texts at all times.” These classics were part of Chu’s everyday instruction: “four ounces,” he would say, “deflect 1,000 pounds.” His other books, in addition to numerous instructional videos, include Why Tai Chi? (2011) and how-to guides The Book of Nei Kung (1986), Eternal Spring Chi Kung (2004) and Chu Meditation (2002). He was also working on two more books: one on Taoist philosophy and another how-to guide, this one on the tai chi short form.