Master Chu consulted on the creation of the Martial Arts Studies B.A. Program at the University of Bridgeport in Connecticut. This program is the only one of its kind in the U.S. and his student Dan Zegibe teaches his system as part of the curriculum. Master Chu’s tai chi, Nei Kung, Eternal Spring and meditation books are the official textbooks for the course. For more information on the Martial Arts Studies B.A. Program, contact University of Bridgeport International College. 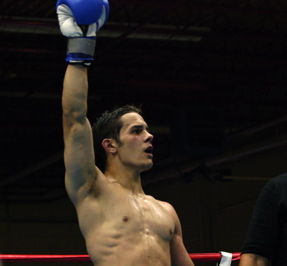 Chu Tai Chi student John Signoriello was honored as fighter of the year in front of kickboxers and martial arts masters from all over the world at the Saturday night closing banquet of the U.S. Chinese Kuoshu Federation’s 2007 US International Kuoshu competition outside Baltimore, Maryland.

The “Lei Tai Competitor of the Year” tribute capped 22-year-old Hunter College student Signoriello’s two-year reign as holder of the middleweight ‘b’ division championship belt, with wins at the Kuoshu full-contact competitions in 2005 and 2006. Signoriello flew for the honor from Taipei, Taiwan, where he is studying Chinese language on a merit scholarship. Banquet attendees included Signoriello’s Sifu C.K. Chu, as well as his Signoriello’s parents and fellow Chu Tai Chi students.

At the July 2006 tournament Signoriello successfully defended his championship title by beating three fighters on a single day (Saturday 7/22/06), including defeat of the 2004 champ in one of three tough elimination rounds.

Signoriello’s signature tai chi moves include a front heel-kick that sent competitors off the three-foot-high lei tai platform, as well as rollback yielding and grabbing. The tai chi influence could be seen at the 2007 fights, where fighters trained in hard styles incorporated tai chi kicks, parry-punches, and two-palm attacks.

Master C.K. Chu, founder of the Chu Tai Chi studio that has been in Times Square, New York City, since 1973, commented, “I’m always proud when my students demonstrate the power of tai chi not just for health but also for self-defense. In my opinion, tai chi is the best system in the world for both health and combat skill.”