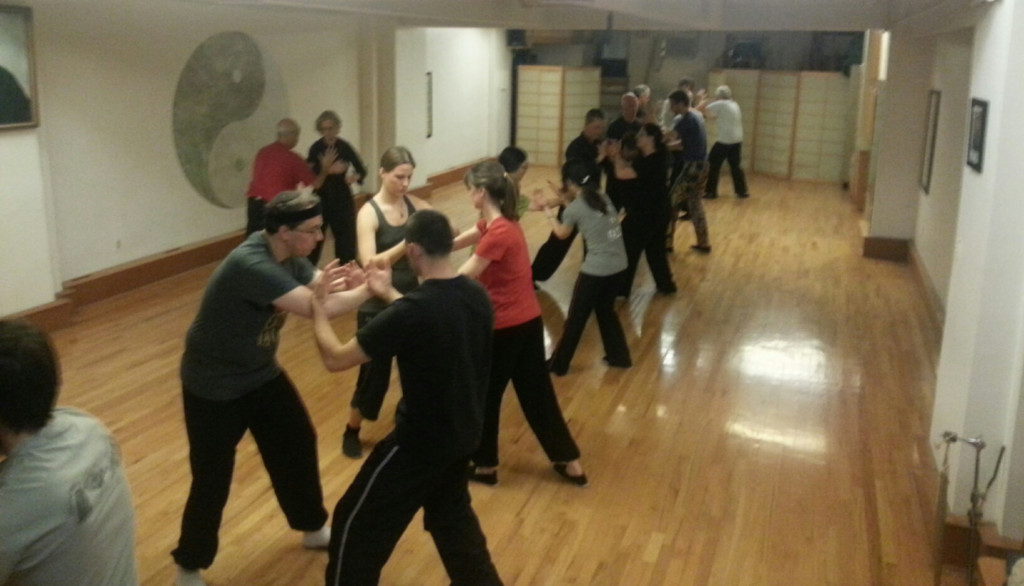 Push-hands is a two person exercise unique to Tai Chi Chuan. Proficiency in push-hands is necessary for high-level tai chi practice. For this reason, we recommend that students begin their push-hands training as soon as they know the Tai Chi form and before they begin Fighting Class. Initially, push-hands class will simply re-enforce the alignment principles taught during the form. But later, it may act as the bridge between the Form and fighting practice.

At CK Chu Tai Chi, push-hands is a serious drill done by two people in a relaxed manner. Three specific techniques are emphasized: sticking–maintaining light contact with an opponent; listening–sensing the magnitude and direction of an opponent’s force; and yielding–responding to an opponent’s force partially by giving way, and partially by controlling or guiding its direction. The ultimate goal of the training is to reduce the amount of force needed to neutralize attacks, so that one may defeat speed and strength with skill.

Ward off, roll back, press, and push. The two yielding and two attacking moves of beginning Push-Hands emphasize a strong root for shifting the weight forward and back, and flexibility in the waist for twisting left and right. As mentioned above, all push-hands practice is two-person. Prerequisite: CK Chu Tai Chi Short Form.

Sometimes called the “four corners technique” because corner movements replace the back-and-forth motion of Push-Hands, with use of the shoulders and elbows and wider footwork. Prerequisites: Tai Chi Short Form, Fixed Stance, and Walking Push-Hands.

The studio is open again, our doors had been closed since March 2020! Pre-registration and proof of vaccination for in-studio classes is required.

Sign up for our newsletter for all updates. Best wishes for everyone’s health and safety.

We’re grateful for your support.

Big Thanks to all who supported our work to renovate and restore our studio — See the <a href="https://www.